Back to Back vPC

A back-to-back vPC is a way of connecting two pairs of Nexus switches with vPC. Depending on the documentation, it is also known as Multi-Layer vPC or Double-Sided vPC.

When a device connects to a pair of switches, it will do so with a regular port channel or LAG. It is unaware that there is a vPC at the other end. From the device’s perspective, it connects to a single switch.

A back-to-back vPC is similar, except that there is a vPC at both ends. In this way, both ends think they have a connection to a single switch. The logical topology is two switches with a port channel between.

There are two topologies that use back-to-back vPC’s. One is at the aggregation layer, where a full mesh of links is usually used. The other is between data centres. This uses a partial-mesh of DCI links. A third option is a hybrid approach, which mixes the two topologies.

It is worth mentioning that the Nexus models do not have to be the same across the switch pairs. For example, the aggregation layer may have a pair of N7K’s, while the access layer may use a pair of N5K’s.

The vPC domain ID’s must be different between the switch pairs. In the diagram below, there are four ports used in each pair. All four ports are in the same port-channel. 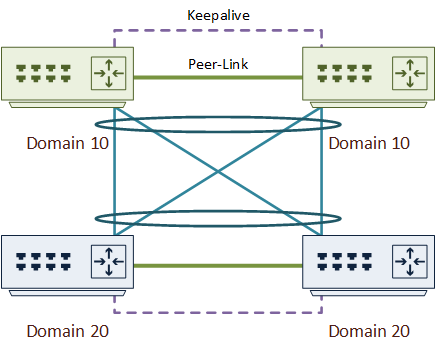 Data centre connectivity can benefit from back-to-back vPC. This is similar to the implementation at the aggregation layer. Although, this usually won’t involve a full mesh of links, as they’re quite expensive.

Cisco’s recommendation is to only use this to connect only two data centres. If you need to connect more, look into another technology, such as OTV or VxLAN.

When using a topology like this, the best practice is to enable BPDU filter on the DCI links. The switches will not send BPDU’s between the data centres. This means that each data centre will have its own spanning tree domain and root bridge. This is a good reason why only two data centres should be connected like this. If you connect more, you may end up with a loop that spanning tree does not detect.

The DCI link ports should be edge ports. This implements portfast, which allows the links to come up faster after a failure. 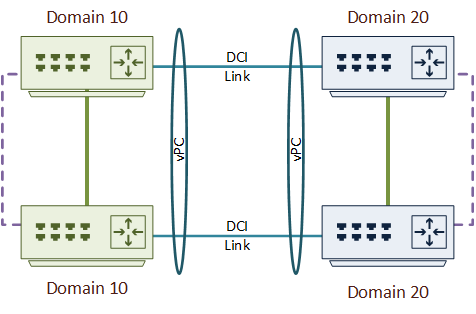 The two previous topologies can be mixed into a hybrid topology. There are three vPC’s shown below:

Before configuring your switches, select the interfaces that will be in the vPC. For example, in a fully meshed back-to-back vPC, you will likely choose 4 or 8 ports across the two switches. Next, select port channel numbers for each pair. As shown in the example, they don’t have to be the same for each pair.

The example below is for a fully meshed back to back vPC between the aggregation layer and the access layer. The example assumes that the basic vPC topology has already been configured. The domain ID’s should be different in each pair.

Ethernet 1/1-2 on each switch will be in the vPC. This is a total of four ports across the pair. All four ports are added to port channel 10 on the first pair, and port channel 20 on the second pair.

One Reply to “Back-to-Back vPC”